The month of October at Whipple has become  known for its haunted history and mysteries, focused on the darker side of events from the past.  I am often asked questions about death,burials, coffins, embalming, cemeteries and rituals of mourning surrounding the coal fields.

Mourning dates back to the Roman Empire but gained attention and  inspired by Queen Victoria in 1841. Queen Victoria turned her very existence into a life dedicated to mourning death. Symbolic rituals seemed to be for the wealthy but followed many immigrants to the United States with its English form finding its way to the coal fields of Whipple. 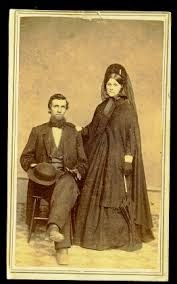 Black was of course the chosen color to be worn by both men and women. This color was to represent spiritual darkness and loss, an outward and public display.
Widows were expected to wear full mourning for two years, – for children mourning parents or vice versa the period of time was one year, for grandparents and siblings six months, for aunts and uncles two months, for great uncles and aunts six weeks, for first cousins four weeks.

Many superstitions associated with death found its way to the States and into the coal camps as a proper means to mourn our loved ones.


When there was a body present in the home ( known as a wake) you had to cover mirrors.

It was believed if the soul of the departed saw their reflection in the mirror, they would become trapped and not be able to leave to begin their afterlife. This might cause the spirit to stay and haunt all who remain in this world. 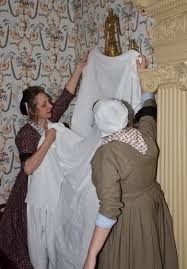 Stopping all the clocks was also done as a superstition  based on the belief that if the clock was not stopped, there would be bad luck upon all those who remain in the home. This belief is said to have originated in Germany and it was said that when a person dies, time stands still for that person. A new period of existence then begins without time.  If the time is allowed to continue moving on, this invited the spirit of the deceased to remain in the home and to haunt without end 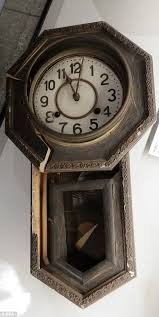 When the body was removed from the home for burial it had to be carried out feet first because if it was carried out head first, it could look back and beckon others to follow it into death.


Its no wonder why so many people are curious about ghosts and haunting when referring to the life in the coal fields, coal mines and coal camps.


We have had many people visit the company store and share their own stories about life, death and mourning. This is a sample of one:


The ol German man  insists on coming into the Whipple Company Store through the side door. it enters into a narrow hallway but allows access to the management side of the building.  After a few moments of trying to persuade him to enter in the front I finally let him in the side door only to be yelled at by him. The door that lead to the long hallway and then the doctors office was the wrong door.


The old German man appeared to be in his late 80's and stood a little bent over. His silver hair was still thick and full on his head, his eyes a steel blue and very moist, staring at the door.  He was shaking a bit from the excitement and I suspect anxiety from the door being wrong.

Wrong for what? I was only beginning to learn and understand. 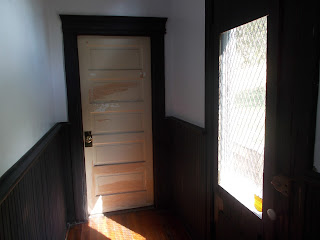 His interest in this door was not his real reason for visiting that day. OL' German, which is what I was told I could call him was here to tell me about the "holding hallway" which was behind this door in the 1900's.
According to his story,  the miners that were embalmed and waiting for the wakes would be placed on long tables in this hallway and the "Prayerman " would spend all day praying over these bodies till dusk. In the dusk when the trees are black but the sky is still illuminated the body would be moved to the home and the family would then continue to watch and pray and visit for approximately 72 hours. Ol' German said this was a very important process very few people were aware.  The prayers and watching the dead would prohibit any evil that would move in on this body using it as a vehicle to a life of unrest. He said, that "evil waits for you to look away."
Ol'German said this was the reason for the wakes, however our young American people were unaware of the actual reason they were watching their family member all the way to the grave.

I have asked many people why we have wakes, and its strange that no one really knows. Perhaps Ol' German knew. 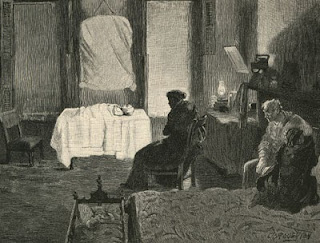 So glad your here!

This is a great place to share about things going on in my world. I have had some wonderful experiences in my company store days and would like to share them. I also am having some fantastic experiences now with my new family and friends. I am getting a face lift and having lots of visitors.
Check back often and share my happenings. 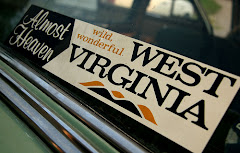 One more reason to Blog

Promote Your Page Too